Memorial Wreath from Sachen-Hausen I

Erik A. Frandsen (1957) lives and works in Copenhagen, Denmark. Working in various media, including installation, painting, mirror, concrete, photography and mosaic works. Despite the variety of media, his visual language is continuously figuratively expressed.

Originally interested in ceramics and sculpture, Frandsen studied ceramic in Greece from 1976 to 1979. Later he spent time in Carrera, training as a sculptor before he moved to Paris where he worked with graphics. In the early 1980s Frandsen moved to Copenhagen, where he co-founded the artist collective "Værkstedet Værst," began to explore other media, and became part of the “det vilde maleri” movement in Denmark.

A characteristic of Frandsen’s artistic practice is his recycling of motives to various mediums. Frandsen is fascinated by the result of the process of appropriation, as it often creates an altogether different expression. By repeating specific themes, the viewer can reflect over different elements of the subject, as the diverse artistic mediums might create a new perspective on details overlooked.

Frandsen is well known for his mosaics, which shows what he refers to as “snapshots” and scenes from everyday life. The medium itself connotes to an ancient method, associated with emperor portraits and religious contexts. For his exhibition at Ny Carlsberg Glyptotek in Copenhagen in 2007, the mosaics were shown together with busts from the Roman Empire, where portraits of power are placed in context together with boxing glows, a man in a Spiderman-suit and children playing at the beach.

His work also prides Frederik the VIII’s Palace in Amalienborg, Denmark where he did two commissioned works for the Danish Royal Family: two site-specific artworks, where one was beautiful wall mural and a mirror hall with large reflective stainless-steel surfaces covered with flowers. Frandsen views the flower as the ultimate symbol, a traditional sign for beauty and life, but also of mortality and death.

Erik A. Frandsen has been represented by Galleri Brandstrup since 2001. 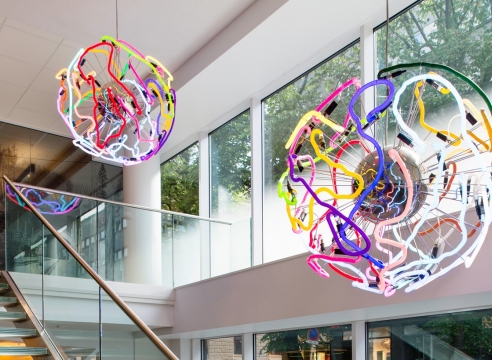 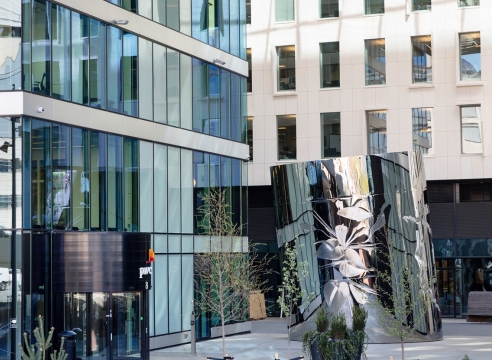