Kjell Erik Killi Olsen started his education at Trondheim Art Academy in 1973, initially planning to work in theatre, with scenography as his main interest. This led him to Academia Sztuck Pieknych in Kraków in 1978, a city where art traditions where strong, the avantgarde was thriving, and where internationally known directors such as Tadeusz Kantor and Andrzej Wajda were working. The scenic role-play and theatrical characteristic would later have a significant impact on Killi Olsen's imagery; both in regards to his sculptures and on the canvas.

After his time in Poland, the artist enrolled in The Norwegian National Academy of Arts in 1979 in Oslo under professor and artist Knut Rose, but quickly diverted to a more experimental way and changed to classes taught by Ludvig Eikaas. After his first year at the academy, Killi Olsen and his colleagues Olav Christopher Jenssen and Therese Nordtvedt quit and left to join the Arts Students League in New York. This was the start of four years in the artistic hub of the East Village, NYC.

The 1980s was a time in Killi Olsen's life that shaped and created his characteristic expression, and when he gained his national and international break trough. The 1980s as an artistic era was largely impacted by a maximalist character, such as “bad painting”, graffiti and kitsch. It was in this environment that Killi Olsen started creating a combination of panting and relief, of which he created the works “Paals Reise” (1983) and “Bronx” (1981), two significant works for the artist’s oeuvre.

In 1986 Killi Olsen had a solo exhibition at Galeria Salvatore Ala (Milan, Italy) displaying his more current form of characteristic sculptures, which would later contribute to him exhibiting at La Biennale di Venezia that same year. Subsequently, Killi Olsen went on to create one of the most iconic artworks in Norwegian art history, “Salamandernatten”, a work that represented Norway at the Biennale in Sao Paulo in 1989. “Salamandernatten” was comprised of 78 sculptures, an installation of fiberglass and paper-mâché elements with a strong symbolic content; the salamander represents evil in Brazilian culture because of its ability to grow back limbs and bigger parts of its body after being amputated. The main sculpture in the installation is a woman breastfeeding a salamander, neutering evil, and is depicted as a humanoid, grotesque, sexual and humorous figure of fantasy.

In 1995 Killi Olsen was Bergen Kunstforening’s chosen participant for the yearly exhibition at Bergen International Festival. The exhibitions expression was  transformed from applying many layers of paint and relief-like surface, into a toned-down color scheme with faded lines. Here he presented one of his most central works from this period, “Veien har ingen ende” which showed a matured style within Killi Olsen´s production.

In 1994 Killi Olsen would make his mark as one of Norway’s greatest sculptors, with his extraordinary contribution to Artscape Nordland, an international collection of site-specific art in Norway, with the 430 cm tall sculpture “Mannen fra havet”. The sculpture was created in cast iron and crystal and raised in Bø in Vesterålen. In 2016 Killi Olsen revealed a new site-specific project within the same scale, titled “Kvinnen som søker vinden" at Schage Eiendom´s new constructions “Quadrum Business City” in Vilnius, Lithuania. In the same manner as “Mannen fra havet” the outdoor sculpture is vast and tall, as well as similarly, both sculptures reflect and pay tribute to their surroundings.

Kjell Erik Killi Olsen is known for his characteristic style of painting and sculpture, and holds an important position in Norwegian art history and on the Norwegian contemporary art scene; in 1998 Killi Olsen exhibited at Galleri F15, before his large solo exhibition “Det var en gang” at Lillehammer Kunstmuseum in 2001. In later years he has exhibited at a number of national and international galleries and museums; From 2005 – 2007 the exhibition “Begynnelsen” was shown at Henie Onstad Kunstsenter, Trondheim Kunstmuseum and Nordnorsk Kunstmuseum In Norway. In 2017 he showed the critically acclaimed solo exhibitions “Den lange reisen” at Galleri Brandstrup and “Killi-Olsen: skulpturer" at Dronning Sonjas Kunsthall in 2018, and was given the honor to be the yearly exhibitor at the Peer Gynt Spelet in 2019.

After years of residing in France, Killi-Olsen now lives and works in Trondheim, where he was born. Here he recently started K.U.K. (Kjøpmannsgata Ung Kunst), an art center for young unestablished artists. 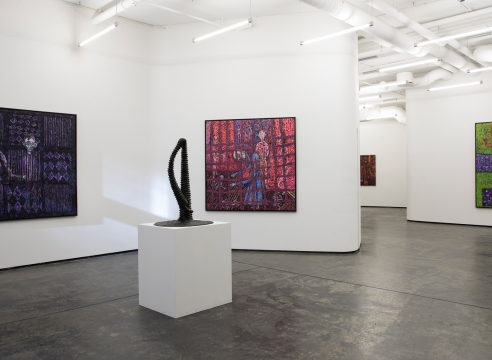