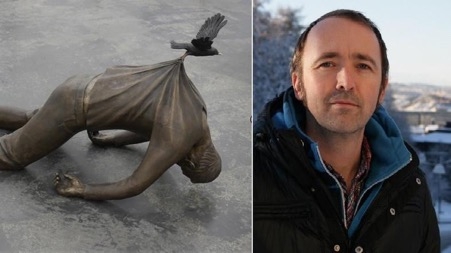 Raddum is a Norwegian sculptor and artist working at the National Academy of Arts in Oslo, Norway. (Photo courtesy: fredrikraddum.no)

Norwegian artist Fredrik Raddum has been known to use his figurative sculptures and installation art pieces to evoke and often explore political themes, especially after the refugee and migrant crisis recently.

One of Raddum’s sculpture, “Trans ī re”, or “the Passage”, has struck people’s attention and images of it has spread widely throughout the world specially in the Middle East, where the migrant issue has become focal as wars and sectarian conflicts grip several countries across the region.

He has also participated in numerous public exhibitions such as the Norwegian National Gallery, the National Museum of Art (Denmark) and the Norwegian Art Council.

Al Arabiya sat down with Raddum to talk about his art:

Al Arabiya English: What is the philosophy behind your art?

Raddum: For me dialogue is the origin and essence of art. Art is mainly a dialogue between the recipient and the artist by presenting an expressive image.

I have my ideas are extracted from the real life around me, such as politics, social differences, or my inner life.

Al Arabiya English: Tell us about the idea behind the sculpture the “Passage”, and the message you tried to deliver to the world?

Raddum: Trans ī re “The Passage” sculpture has a philosophical dimension. “Something was here now and it would leave sooner or later.”

In my last exhibition I presented the new beginnings we are looking for, for which we give up and leave everything, and run away to start a new life, on a journey to search for the Utopia.

This work of art is a reflects the case in which all issues and problems accumulate, but with a little help from the nature, it can create a new feeling to get rid of anxiety, stress and psychological disturbances, Furth more it helps to erase it; when the problems occur, you have to look at it from a wider perspective, this is what happens when resorting to the nature and seeing it with a narrow perspective.

Al Arabiya English: Did the migrant crisis have an impact on your art?

Raddum: I think solidarity is the key to have a better world. For me I try see people enjoying equality and justice, that's what I'm trying to convey through my art. We have to accept that truth is flexible, and that everyone has his own understanding of life and society. If we accept this, we will get rid of many of the violent actions. This is what I am trying to reflect through my work pieces, such as the “Gypsy” and the “Gift”, in which I tried to convey a similar feeling about our need for cooperation and assistance through what represents us.

Al Arabiya English: Most of the sculptures and artworks you made are without your faces. What is the message you are trying to convey?

Raddum: For face is what fakes the identity, sometimes to highlight what is happening inside the mind I try to reflect what is inside to outside without falsification, such as the “Lumphead” piece where no facial features appear except a large swollen head. I try to reflect the inner feelings, I think this is very common, but people do not talk about a lot.

Other sculptures with their heads covered with boxes and bags. This is associated with the visibility of the identity to others.

For me changing and covering heads and minds is a way to talk about us; humans, how we deal with each other, and what happens inside our minds as well.

Al Arabiya English: After your works had been spread on the social media, did you receive an invitation to display your works in the Arab countries, and which country do you wish to hold an exhibition of your works of art?

Raddum: I had a lot of attention from the Arab countries, and I like to display my work in the Middle East exhibitions and museums.

Al Arabiya English: What would you like to say to the Arab artists?

I encourage them to produce works of art that represents them and share their ideas with the community.