The counter disciplined artist Trine Lise Nedreaas primarily works with video, but she is also a practiced drawer and sculptor. The artists’ earlier work has evolved around the fascination for human enthusiasm, ambition, and passions, often for those who take place outside conformism. Nedreaas works in a variety of media but is best known for her intriguing and beautiful films. Her first solo show at Galleri Brandstrup (May 2015) was titled Superterrestrial, which had a conceptual idiom.

The video works of Trine Lise Nedreaas lie somewhere between the realms of portrait, performance, and documentary. These areas are subtly woven together in strictly directed, symbolically charged films of individuals engaging in their own specialist act. The subject of “individualism“ often show isolated protagonists alone in their passions, making the aesthetic constantly uncanny and disturbing. They are still determined and driven, often humorous and sympathizes with the stuttering and stumbling, but always trying.

The subject of Superterrestrial revolved around the mind-blowing endlessness of time and space are brought down to an earthly scale through simple materials and playful human performances. For this show, Nedreaas let herself inspire by human ambitions to grasp the intangible and insubstantial above the earth, trying to grasp concepts that exceed our limited capacity of understanding.

Nedreaas states that she mainly works with the medium of video because most of her ideas come to her as moving images. Working digitally using post-production techniques allows her to easily manipulate footage, which gives the work a feeling of being as much created and made, as filmed. The genera explore the relationship between performance and documentary; the subjects of her videos always perform their specialty live, in front of an audience in particular settings. The ungraspable mystery of life, the nothingness after, the meaning and origin of it all: these abstract and universal topics are underlying in Nedreaas’ works which despite their seriousness, manage to have a warm and humorous tone. 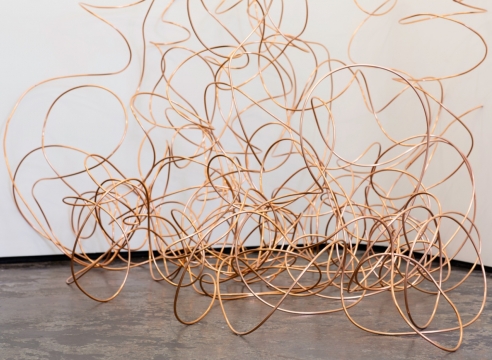