It’s with great pleasure that Galleri Brandstrup present “Mock Sun”, our first solo exhibition with renowned artist Diana Al-Hadid. The exhibition consists of three sculptures, a series of wall panels and two works on mylar. The exhibition opening will be on Thursday, October 17 at 6 pm.

The title of Al-Hadid’s exhibition, “Mock Sun”, is derived from the artist’s recent encounter of a parahelio, a natural phenomenon in which the sky suddenly displayed three suns. Upon researching this magical sight, Al-Hadid discovered the German 16th-century manuscript, “The Book of Miracles,” which depicts in rich luminous detail, a collection of illustrations of unexplained natural celestial phenomenon including parahelios, blood rains, insect invasions, and comets carrying swords. The manuscript is a spectacular discovery for Renaissance art that reflects apocalyptic anxieties that emerge during times of dramatic cultural shifts. Bold paintings that illustrate a host of unexplained astronomical visions with mythological and religious narratives alike, presented as a scientific treatise. The book has been a direct inspiration for the artist but has been altered and transformed through Al-Hadid’s technique and process. However, the subject matter is the same and always relevant; humankind’s everlasting immutable longing for grace, for mercy, and for the miraculous.

Al-Hadid is known for her elevated sculptures and wall panels which seems to melt or harden, caught in a chemical phase change from one state to the next. She has developed a unique process of using traditional and contemporary materials such as polymer gypsum, steel, plaster, fiberglass, wood, polystyrene, cardboard, wax, and paint. The wall panels balance somewhere between fresco and tapestry, they seem to almost float on the walls. The lofty sculpture showed in “Mock Sun” is also a reference to art from centuries past. The work is a second in a series of five large-scale sculptures that imagine a number of possible futures for the central figure in Hans Memling’s painting “Allegory of Chastity” (1475). The painting depicts a primly posed woman sitting inside the crest of a mountain, wearing the rock as a skirt, her hands politely folded in front. Freed from her mountainous “chastity belt” in this new sculpture, the jagged mountains are replaced by new landscapes and structures. These new propositions introduce both narrative and material developments as well as giving new life to the figure after the painting. Now that the female figure is free from her prior constraints, while surrounded by the volcanic and apocalyptic imagery of her panel work throughout the exhibition, one might pose the question: What happens when her volcano erupts? Where does she go?

Born in Aleppo, Syria, in 1981, Al-Hadid immigrated as a five-year-old child to Ohio, USA. Her art is often described as metaphorical bridges between the Middle Eastern world of her early childhood and the Western world she now inhabits. She is known for a practice that spans media and scale and examines the historical frameworks and perspectives that shape our material and cultural assumptions. Al-Hadid’s works carry with them indications of a diverse set of interests and inspirations, including mythology, architecture, literature cosmology and physics, to investigate intersections that materialise through exchange and appropriation.

Al-Hadid received a BFA in Sculpture and a BA in Art History from Kent State University in 2003, and an MFA in Sculpture from Virginia Commonwealth University, Richmond in 2005. She also attended the Skowhegan School of Painting and Sculpture in 2007. She has had solo exhibitions at the David Winton Bell Gallery at Brown University, Providence, RI, NYU Abu Dhabi University Gallery, Abu Dhabi, UAE, The Vienna Secession in Vienna, Austria, the Columbus College of Art and Design, Columbus, OH, the Akron Museum of Art, Akron, OH, the Savannah College of Art and Design, Savannah, GA, the Weatherspoon Museum of Art, Greensboro, NC the Virginia Museum of Fine Arts, Richmond, VA, the University of Texas at Austin, Austin, TX, the Nasher Sculpture Center, Dallas, TX, the Centro de Arte Contemporánea, La Conservera, Murcia, Spain, the Nevada Museum of Art, Reno, NV, and the Hammer Museum, Los Angeles, CA. Her work is included in collections such as the DeCordova Museum and Sculpture Park, Lincoln, MA, the Whitney Museum of American Art, New York, NY, the Virginia Museum of Fine Arts, Richmond, VA, the Museum of Fine Arts, Houston, TX, and the Weatherspoon Art Museum, Greensboro, NC. In 2018 and 2019 Al-Hadid has exhibited “Sublimations” at First Art Museum and Cheekwood Garden, “Temperamental Nature” at Berggruen Gallery, “Delirious Matter” at Williams College, “Delirious Matter” at The Bronx Museum of the Arts, “Delirious Matter” at Madison Square Park Conservancy. She has also executed the permanent installation “The Arches of Old Penn Station” at 34th street Penn Station Stop in New York. 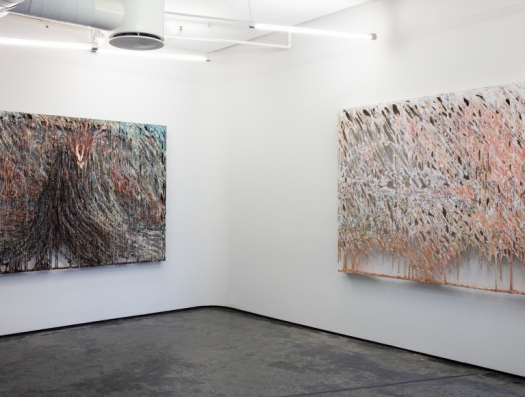